The building wasn’t actually as bad as I imagined…At least on the outside. I spent a bit walking around it & getting photos of the debris. Rusted out filing cabinets, downed power lines & plumbing fixtures were everywhere. ALL of the large metal doors with their little windows at the top stood partially open, reminding me of EVERY horror movie I’d EVER seen! A smart person wouldn’t go inside…Well, I’ve never claimed to be a genius, so here goes nothing… 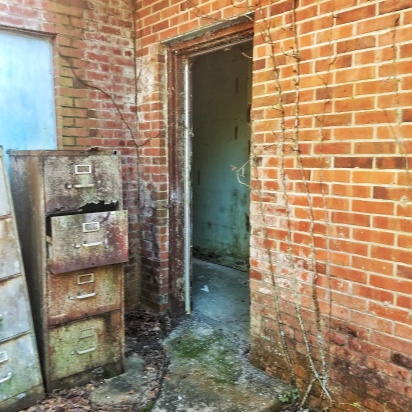 THE INNER VOICE OF REASON IS A PAIN IN THE ARSE!

A couple of deep breaths & a few short steps later, I was standing inside! I wouldn’t know it until weeks later, but the building that I took my very 1st steps into was the North Campus Recreation building. I then spent the next few minutes listening to my head & my heart arguing with one another, almost like the proverbial angel on one shoulder & devil on the other. Strange as it may be, the internal dialog went a little like this:

HEAD:  “YOU’RE ALONE & NOBODY KNOWS WHERE YOU ARE!”

HEART:  “THIS IS WHAT YOU’VE BEEN WAITING FOR…FOR OVER 3 YEARS!”

Great! So if I don’t get murdered OR have a building cave in on me, I’m gonna probably die from exposure to Asbestos! Oh well, guess it’s too late now!

After resigning myself to the fact that I was actively absorbing asbestos, I started to look around. The 1st door I came to was half open so I put my phone in the crack by the hinges & snapped a pic, using the flash to light up the corner behind the door…Just making sure that nothing was hiding behind it! When I didn’t get attacked by a hatchet wielding maniac, I went in…

The room itself wasn’t large but at least the window kept it well lit. The focal point was a large, metal desk with rusty drawers that were ALL open. Littering the desk & floor were papers…School papers! Staff training manuals, intake forms, policy & procedure memos, etc. we’re everywhere! It literally looked like someone knew eyes would be on the school & tried to clear out as much as they could as fast as possible. Me being me, I grabbed as many pages as I could fit in my pockets & moved on. I was definitely going to have to be more prepared for any future trips! Mentally making my list of things to bring next time, I walked down the dark, narrow hallway & right into a large room with several sets of metal doors. The floors were covered in dirt, insulation & even more papers. Seeing so much insulation had me looking up at the ceiling…What was left of it! Maybe I should add a damn hard hat to that list! The walls still held memos & lists of “Rules” written out for the students. Eerily, there were little signs in random places that children had lived there. Names carved into walls & white boards, hidden behind staff memos & policy postings. Messages with initials & dates, silently letting people know “Don’t Forget Me, I Was Here.” It was definitely a sobering experience but would only be my 1st of many that day. 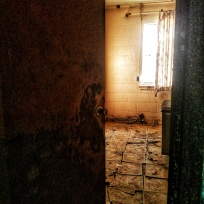 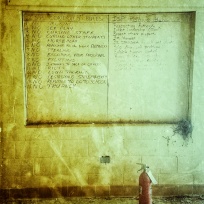 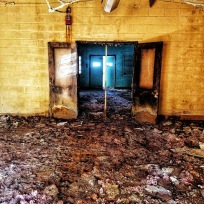 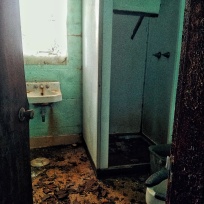 Because I was alone, I decided to wait to go down the other hallways running through the side with all of the offices. As badly as I wanted to explore EVERY single inch of that building, there were way too many dark corners that would make great hiding spots should someone OR something want to lie in wait. I finished up exploring as much as I could of the Recreation building & left the same way that I entered. I CRUNCHED my way back over to the fallen tree “bridge” & climbed up (much harder than crossing it the 1st time!), putting one foot in front of the other until I was back on the other side. Deep in thought & waiving both arms around my head like a damn crazy person (Crappy Ass MOSQUITOES!), I started walking to my car, out in the open…Directly into the line of sight of a maintenance worker! DAMMIT! Even though we were quite a ways a part, we both froze & stared at each other. I’m pretty sure that he was just as shocked to see me as I was him. After a minute OR so, he gave a little nod & went about his business. I loudly let out the breath I’d been holding & shaking my head at how careless I’d been, went on my way as well! Time to see that old cabin halfway down the hill & then get a closer look at the Church… 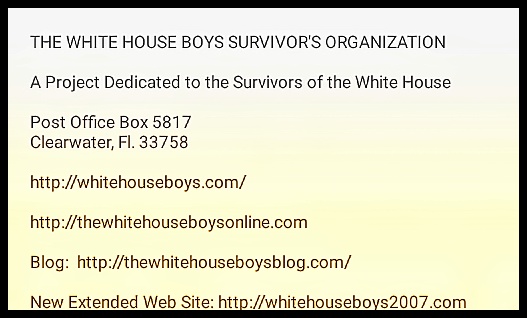