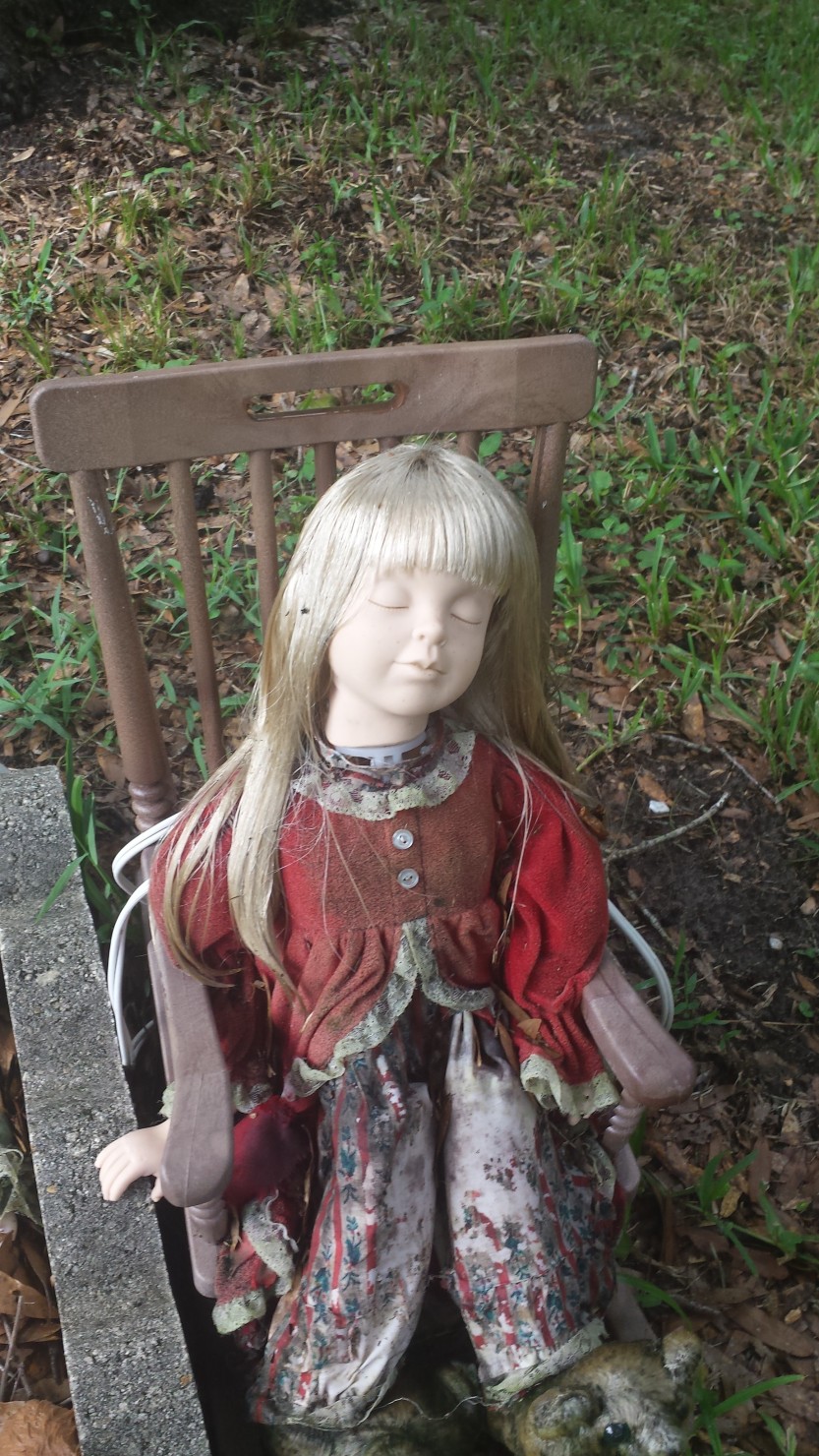 There are places that you visit that are beautiful, peaceful & calm… And then you have those places that are the exact opposite. You know, the ones that cause the hair on the back of your neck to stand up & cause you to freak the Hell out, pee your pants & run screaming back to your car within the first few minutes of beinxg there (true story btw…Well, everything but the pee-pee pants!)! Springhill Cemetery IS the place that TOTALLY fits into the latter.

EVEN HELL HAS A BACKSTORY
Built sometime in the 1850s, Springhill African-American Cemetery is known as one of the oldest cemeteries in Hernando County & is actually 3 different plots located down a narrow, unpaved path through heavy, dark woods off of Fort Dade Avenue. The land for the cemetery was said to be donated by the Lykes family, who were well known property holders in the area at the time. Across the street from SHAAC, is additional land that had been used for the white burials during the same time period…That land is known as the Lykes-Ayers OR Confederate Cemetery.

INSIDE A PRESSURE COOKER…
I believe there are very few places that are evil from inception. There are almost always stories of murder, mayhem, rituals, etc. that accompany a location purported to be haunted. If you piled up layers of tragedy, hate, evil & death over an extended period of time, what would eventually happen?? I’ll Tell you EXACTLY what happens….It becomes a pressure cooker just waiting to explode! It may take years BUT God Help Us ALL when it finally does!

CREATING EVIL..
So what happened in & around Springhill over the last 168 years to cause the “Pressure Cooker” to start letting off steam? Well, Hangings, Lynchings, Klan Activity, Satanic Cult Rituals, Grave Robbing, Vandalism, Drug Activity & a potential slaughterhouse located within the thick forest that borders the cemetery. ANY one of those things on their own would be enough to cause a location to be unsettled at the very least. Put ALL of those things together & that place is “F’d”…Potentially FOREVER!!

WHAT I BELIEVE…
I consider myself somewhere between a die-hard believer in the paranormal & a borderline skeptic. It’s NOT that I don’t want to believe 100% BUT I’m a visual person. Bottom line…Unless it ACTUALLY happens to me, I have trouble fully suspending my disbelief. So, what do I believe about SHAAC?? Gather round little children because I’ve got a story to tell Y’all…

My 1st experience with SHAAC literally ONLY lasted about 30 minutes & was NOT a pleasant one! I was by myself & from the minute I laid eyes on its sign on the side of the road, I had anxiety so bad that my heart felt like it was pounding out of my chest! It got worse as I started driving the rough road through the woods & by the time I’d gotten to the black iron gate, I was now completely panicked! Before I could talk myself out of it, I got out…And made a bee line for the middle of the cemetery. Most of the graves in this area were under the shade of the old oaks with thick moss swinging in the breeze. The 100 degree, 110% humidity, Florida summer breeze. And then IT happened…That hot air blowing around turned ice-cold! Not just cool BUT “I JUST WALKED INTO THE FREAKING BEER COOLER AT THE 7-ELEVEN” frosty cold! I panicked…AND RAN THE WRONG F’ING WAY!!! My car was like a mile away! As I stood there trying to come with a plan I swear I could hear footsteps & whispering ALL around me! I started texting the Bestie (although she lives an hour away so I had NO clue how She could bail me out of this one!) & while looking down, I locked eyes with the creepiest doll I’d EVER seen…And then I saw them! Some were broken, missing limbs, burned & ALL OF THE LITTLE BASTARDS WERE GLARING AT ME & I SWEAR THEY WERE SMIRKING!! JESUS!! A doll grave…WTF?? I snapped several pics & texted them to the Bestie!

Within seconds she called me…”Get the “F” OUT OF THERE…NOW!!” You DON’T gotta tell me twice! I ran down the middle of the cemetery & didn’t stop until I was inside of my car, door locked! I drove back through the woods until I was back at the little circular driveway off the main road. I stopped to try to get my shit together before making the long drive home. As I took my last couple of pics of the cemetery sign, I noticed a sheer ball of light hovering over the sign. It moved slowly back & forth in front of the sign.

As I pulled away, I couldn’t shake the feeling that the ball that I’d seen was SHAAC’s way of laughing at the havoc they had wreaked at my expense that day & I’m NOT gonna lie, it kinda pissed me off!


I’d NEVER experienced ANYTHING like that & thought that I’d NEVER experience anything like it again. Little did I know that just 48 hours later the things I would witness would make those previous events look like a trip to Disney World…