Sitting at the intersection of Jim Denney & Jessamine, I programmed my GPS with the coordinates for the 23100 Block of Powell Road…The coordinates that would take me to the wooded area where searchers discovered the body of Jennifer Odom, 6 days after she was abducted just 200 yards from her home.

Before getting into the drive, I want to mention something REALLY creepy that I saw while using Google Maps to familiarize myself with the area.

In my 1st post on this case, I gave a description of the older, blue truck that witnesses on the school bus reported seeing “slowly creeping” toward Jenny as she began to walk home. To this day, this truck & its driver/owner have NOT been found. When looking at the Google Map for the wooded area in Hernando County where her body was found, I used the feature that enables you to tap your screen & get a 360° view & also scroll to travel up & down the street & what I saw chilled me to the bone…

THE ROUTE OF A PREDATOR…

From Jim Denney Road I took a right, back onto Jessamine, heading north. Jessamine is a 2 lane, winding road that runs past widely spaced out homes, various groves & a number of farms. a good portion of the homes & buisnesses are set back from the road & either down private roads OR behind elaborate fences & gates, so there wouldn’t really be much of a concern of being noticed as you drove by. There was also a good portion of the time that the road was surrounded by thick sections of wooded areas, especially once I crossed over from Pasco to Hernando County. The speed limit is between 35 & 45 MPH depending on what section of the road you’re driving at the time…Anyone unfamiliar with the area, myself included, would honestly have a death wish if they chose to drive much over 45 MPH.

MY IMPRESSION OF THE DRIVE:

Estimated time from Jim Denney Road in Pasco to Powell Road in Hernando is around 16 minutes…Assumming that this time applies to a person who’s familiar with the area & travels the road frequently. It took me almost 25 minutes. At times I wasn’t confident enough to even do the speed limit, so I was often about 5 miles under. I also had NO idea where I was going & had to rely on my GPS! That being said, Someone living OR working in the area could easily & confidently drive this road at OR over the posted speed limits & NOT really think about missing a turn OR getting into an accident…Even if they had the added “Stress” of having a just abducted, crying & scared, 12-year-old girl as their passenger. Keep in mind that he was pretty certain that NO one had witnessed the abduction, so he was confident that NO one would be searching for either of them for awhile. As I drove, I imagined that this predator knew he would take this EXACT route & wasn’t overly worried that anyone would see him & if by chance someone did, would they actually realize what was happening? Probably not. I saw about 5 cars total during the entire ride & absolutely NO people standing OR walking close to the road…I don’t even recall seeing anyone out in a yard OR working out in one of the farm fields. It was very isolated BUT he knew that it would be… 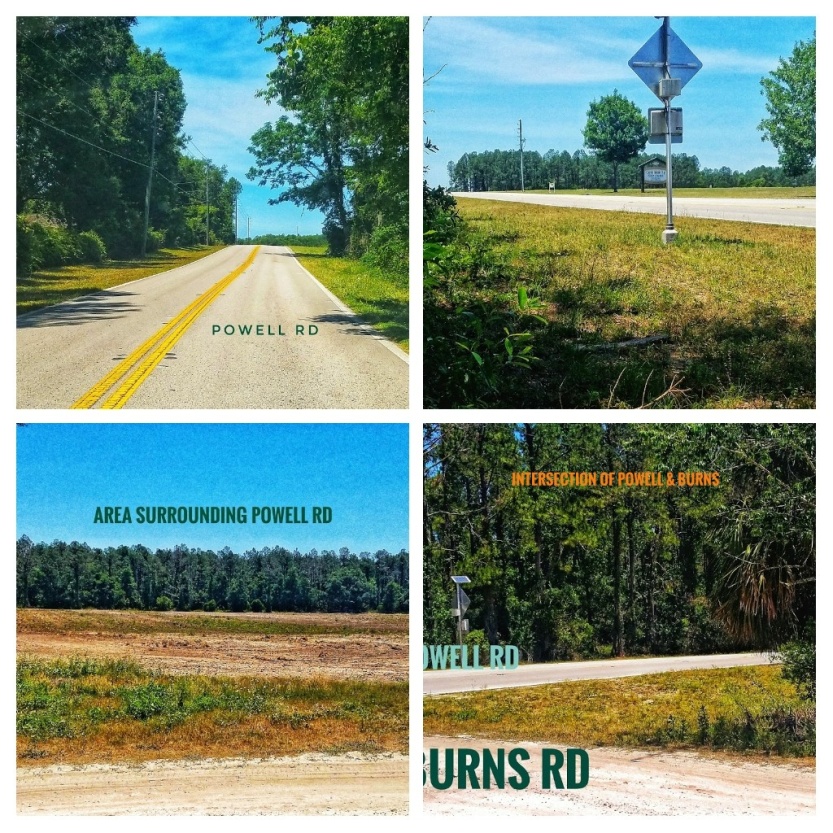 When you enter Hernando County, you’re stepping into miles & miles of thick woods, 2 lane roads & pick up trucks…And that’s in 2018! 25 years ago it woud have been way more rural & isolated. To get to the handful of houses & farms surrounding the 23100 Block, you’d have to continue down Powell Rd. a few miles in either direction OR turn down one of the several unpaved side roads off of Powell. I pulled into a grassy area & walked a few feet in each direction in front of the opening to the woods. Nothing…I saw absolutely nothing! The closest structure was a church that stood across the road BUT was separated by a pretty substantial open field & I’m NOT even sure if that church was  there back in February of 1993. Had it been, I don’t think it would have been an issue as I didn’t see anyone at that church when I was there. On the corner of Burns Rd & Powell, in the same grassy area that I parked in, was a big black truck with a “For Sale” sign in the window. Obviously this particular vehicle was NOT here 25 years ago, however, it left me to wonder if this particular area was just as popular to advertise vehicles for sale back then… 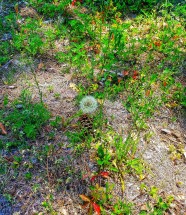 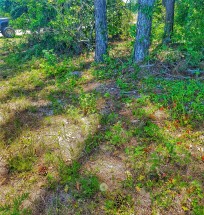 Standing at the edge of the road, I set my phone’s GPS to measure out 600 feet & started walking. It led me through the opening, into the the thick brush, walking over piles of dead leaves, tree roots & discarded debris until it eventually had me come to a stop, 600 feet inside, right at the base of a single orange tree… 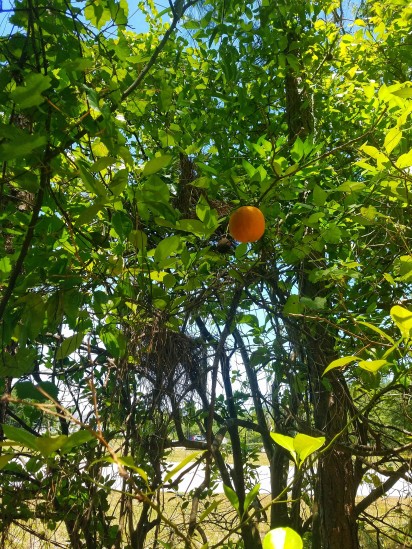 In 2017, a local news station did a piece on the anniversery of the abduction & murder, featuring the Hernando County detective working the cold case. In the segment, a photograph was taken of the detective standing in the spot where Jenny had been found…It was marked by a single orange tree. Fortunately, I was able to match up that photo to where I was currently standing & instantly knew I was standing in the same spot (OR at least pretty damn close!). I stood there for awhile, turning in circles, trying to absorb my surroundings while thinking about potential scenarios. There are a few things that stood out to me right away…

The 1st being that I could stand ONLY 600 Feet off the road & be completely camouflaged BUT still have a perfect view of everything outside of the woods. I even tested this when a man pulled up & got out to look at the truck for sale. NOT only did he NOT see me BUT when he saw my vehicle parked there, he actually walked over to it to look, thinking it was also for sale. NOT  until I stepped out of the woods did he realize he wasn’t alone…He had been so unaware of my presence that I nearly gave him a heart attack when he saw me! 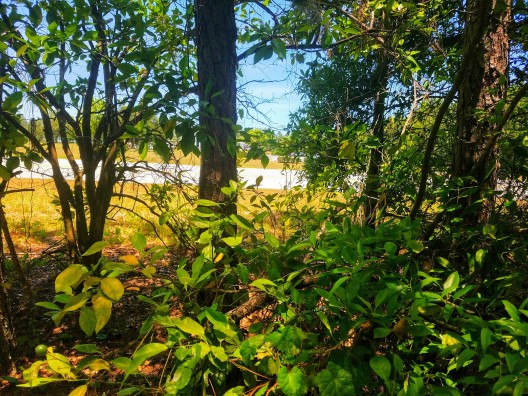 The 2nd was the fact that the man didn’t seem to be concerned about 2 vehicles parked in front of a wooded area. Even when ONLY 1 of them had an actual “FOR SALE” sign in the window, he still didn’t hesitate to walk right over & check it out…NOT even looking around to see if another person is nearby. He did tell me that he lived in the area for most of his life, which equated to around 30 years, & that he didn’t think it was strange at ALL to see multiple vehicles parked on the side of a random road because it’s a regular occurrence.

Between the drive & seeing the place that Jenny was found, there was NO doubt in my mind that this person had planned to abduct someone that day. I’m almost positive that he had decided that Jenny would be his victim prior to that day…Here’s why:

Taking everything above into account, there’s one thing that I believe IS crystal clear…There’s absolutely NO way that the abduction & murder of Jennifer Odom was this predator’s 1st crime. There was some degree of planning that went in to this crime & someone who hasn’t attacked before would have shown signs of being frantic, possibly even making a mistake. While I’m NOT saying that he’s murdered all OR even any previous victims, I think he’s committed a number of violent sexual assaults, probably going back years. It’s typical for a predator to start off with lesser offenses & as their confidence builds, so do their crimes. He hadn’t been caught in the past & felt emboldened to continue committing violent assaults, eventually adding abduction & murder. You have to wonder how many previous victims were there prior to February 1993 & How many more have there been since?

LAW ENFORCEMENT ARE STILL TRYING TO LOCATE THE CLOTHING THAT JENNIFER HAD ON WHEN SHE WAS ABDUCTED. BELOW ARE PICTURES DEPICTING THOSE ITEMS AS WELL AS A DESCRIPTION (NOT PICTURED: white turtleneck, red pullover sweater & white denim pants)…

**IF YOU HAVE ANY INFO REGARDING THE COLD CASE OF JENNIFER ODOM SHOULD CONTACT THE HERNANDO SHERIFF’S OFFICE AT:

FOR FULL PHOTO GALLERIES & ADDITIONAL LOCATION INFO FOLLOW ME ON FB AT:  @GRAVEAdventuresFL