TO THE OFFICIALS AND CITIZENS OF MARIANNA, FLORIDA:

I AM WRITING this to implore you to step up and finally do the right thing regarding the Arthur G. Dozier School for Boys (formerly the Florida Industrial School). For years, representatives of Marianna and its residents have spent much of their time and energy disputing and distorting the facts of this situation. You have put maximum effort into denying what happened at Dozier and at times have flat out lied/covered up the details of the horrendous events that took place for over 100 years while an entire town chose to look the other way.

MILTON AND DOZIER were given proper burials and rest in peace in a well kept graveyard. Both are memorialized with marble headstones & elaborate monuments, surrounded by their families. The same cannot be said about Dozier’s “students.” They were dumped into the ground secretly, under the cover of night. NO beautiful headstone confirming their short existence on this earth. NO family there to say goodbye. NO pomp and NO circumstance for them because in the eyes of Marianna, they meant nothing. 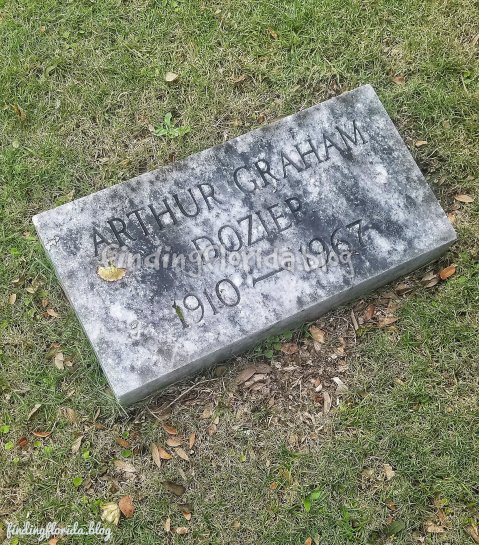 YOU HAVE CONTINUALLY painted CHILD ABUSERS, SEXUAL PREDATORS and MURDERERS as town heroes. Arthur Dozier is NOT a hero (nor are his predecessors, successors and ALL of the other disturbed individuals that spent countless hours abusing young boys). Senator W.H. Milton is certainly NOT a hero as it was he who started Marianna down the path of destruction, fighting to have the school built in Marianna and springing into action each time an FISB/AGDSB superintendent approached him with some “innovative” way to increase the school’s profit.

YOUR TOWN HAS canonized them, protecting and defending them and ALL of the others involved. Arthur Dozier was given a memorial on school grounds; The same grounds where countless children were raped, beaten and murdered. The school became his legacy, eventually bearing his name. But sometimes fate has a way of biting back as Arthur Dozier, the man, will now forever be synonymous with a notoriously brutal reform school.

THERE ARE PEOPLE in Marianna who know and have the power to finally give these families closure and yet you choose to keep your secrets buried. I ask you, where’s the humanity in that?

YOU BELIEVED THAT you were untouchable. As the decades passed, the views and practices of the world were ever evolving but NOT in Marianna. You stayed true to your cruelty, convinced that the laws protecting children were NOT for you to follow. You almost got away with it, however, you became over confident, leaving behind many witnesses. They were victimized BUT they are NOT victims. They are survivors and they are brave. They WILL now be YOUR undoing. You call them liars but have you asked yourselves what purpose it would serve for NOT one, NOT ten, NOT fifty BUT hundreds to step into the public eye and tell millions of strangers that they were abused in the most heinous of ways? Having worked with abused children myself, for many years, I can assure you that there isn’t ANY. Of the many ways one can gain notoriety, publicly declaring yourself a victim of the most horrific abuse imaginable is NOT very high on the list. Having hundreds speak of the same instances is unheard of.

IT WAS YOU that caused these men to go to the public. It was YOU that set these events in motion. YOU had an opportunity to listen to these men, acknowledge their pain and suffering, empathize with what they had gone through and offer a sincere apology. By failing to do even one of these things and continuing to taunt, slander and bully, you threw gasoline on a fire that has been smoldering since the day that the very first adult fist was raised to strike a child residing at AGDSB. YOU have nobody to blame but yourself. Your behavior is shameful.

YOU SAID THAT there were NO undocumented burials on school land and yet the remains of 24 boys were found in unmarked graves on the property, with evidence that there are many, many more. Even after that YOU still minimalized the situation, intentionally setting out to deceive.

WE ALL KNOW that there are former Dozier staff in your community that shouldn’t be free and definitely should NOT be within 50 miles of ANY child.

SOON THE ENTIRE world will have heard of Marianna, Florida and the Arthur G. Dozier School for Boys. You can’t change the past, however, What you now need to decide is what you will be known for from this moment forward. Will you forever be known as the town that did nothing while children were tortured and murdered OR will you be the town that refuses to allow its dark history to define it. The sins of the father do NOT have to be passed to the child.

I CHALLENGE YOUR town to come together, admit to what has taken place and issue a sincere apology to ALL affected by what took place at the Arthur G. Dozier School for Boys. It’s time for you to let go of the reigns as they don’t belong to you…They never really have. What’s happened can NO longer be covered up. You are NO longer in charge and with so many people standing behind the survivors, you are starting to lose what little control of the situation that you have left. Take a moment to let that sink in, swallow your pride and step aside. If there is anyone having an issue with this request, remember this:

☆ IF YOU OR SOMEONE YOU KNOW SUFFERED ABUSE, PASSED AWAY, WENT MISSING OR WITNESSED ANY WRONGDOINGS WHILE AT “THE FLORIDA INDUSTRIAL SCHOOL FOR BOYS” AKA “THE ARTHUR G. DOZIER SCHOOL FOR BOYS” OR THE OKEECHOBEE SCHOOL FOR BOYS, PLEASE REACH OUT AT findingflorida.blog OR ANY OF THE CONTACT INFO LISTED BELOW!!☆